The Clockworks provide a variety of Art Deco Clocks for sale and related services, including clock repair and sales. We offer a wide range of watch and clock spares, both old and new. We specialize in dial and case restoration, full-service clock repair, and clock maintenance.

Art Deco was a style that 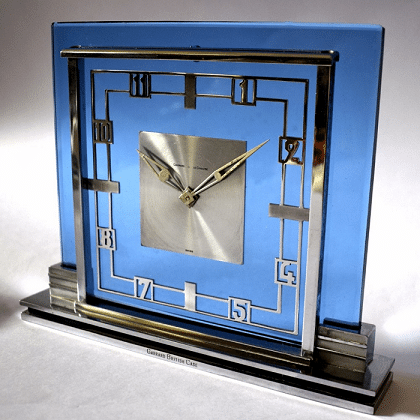 reflected a machine-like aesthetic in a fast-paced industrial age. This influenced Art deco clocks for sale design heavily in the 1920s, 1930s and ’30s. Art Deco’s minimalist touch was evident in every object, even clocks. Their cases often reflected the geometric architecture of the time.

The Swiss and French were the top producers of Art Deco clocks for sale in Europe. The French were the best at clocks, especially for mantels made from marble, onyx and brass. Many of these clocks had columns on the sides and Roman numerals on the faces. Others were made for use on desks.

They were often placed on marble bases, beneath which were nickel feet. The clock was flanked by a pair of inkwells that most collectors use to store paper clips and other office supplies. Pairing French clocks with bronze figurines, such as Diana the Huntress with an ivory bow and green-onyx shield, was common. Bronze, fantail doves and lovebirds were all common choices.

The French also made large grandfather clocks in Art Deco style. Some of these were made from rosewood and featured silver-finished faces. Clear glass was used on the pendulum doors. Edgar Brandt was one of the French Art Deco clock for sale designers. His hand-forged, forged iron clocks often sat on marble bases.

Art Deco is also known as Deco. It is a style that combines architecture and visual arts. It was first developed in France before World War I. It was influential in the design of furniture, jewelry and cars. Its name, abbreviated Arts Decoratifs, was derived from the 1925 Exposition internationale des arts décoratifs et industriels moderns in Paris.

Art Deco combined modern styles and fine craftsmanship with rich materials. It was synonymous with luxury, glamour and exuberance during its golden age.

Art Deco was influenced from the beginning by the bold geometric shapes of Cubism, the Vienna Secession, the vibrant colours of Fauvism, and the Ballets Russes, as well as the modern craftsmanship of Louis Philippe I, Louis XVI, and exotic styles of China, Japan, India and Persia. It used rare and costly materials like ivory and ebony, as well as exquisite craftsmanship. It is a monument to this style in the Empire State Building, Chrysler Building, as well as other New York City skyscrapers built in the 1920s and 30s.

Art Deco was more controlled in the 1930s during the Great Depression. There were new materials like chrome plating, stainless-steel, and plastic. The 1930s saw a sleeker version of this style called Streamline Moderne. It featured curving forms and polished surfaces. Art Deco was one of the first international styles. However, its dominance was ended by World War II. This led to the rise of the International Style and strictly functional architecture.

EtymologyArt Déco was named after the 1925 Exposition Internationale des Arts Decoratifs et Industriels Modernes in Paris. However, the many styles that made it famous had been seen in Paris and Brussels prior to World War I.

Le Corbusier, an architect, wrote several articles on the 1925 Exposition for L’Esprit Nouveau. They were entitled “1925 EXPO.” ARTS. DECO. DECO. The book was a passionate attack on the extravagant, colourful objects displayed at the Exposition and on the idea of furniture without decoration. His conclusion was “Modern decoration does not need decoration.”

Art deco was not used in print until 1966. It was first mentioned in the title of the first modern art deco exhibition, which was held at the Museum of Decorative Arts in Paris. Hillary Gelson, a reporter from London, used the term in a 1966 newspaper article that described the various styles in the exhibit.

Art Deco was first popularized as a stylistic term in 1968, when historian Bevis Hillsier published Art Deco of The 20s and 30s. He pointed out that art dealers were already using the term and cited The Times (2/11/2016) and Les Arts Deco (November 1967) for examples. He describes in his book how he organized an exhibit at the Minneapolis Institute of Arts in 1971.